The last two weeks have gone really well! I am making great progress on the outline that I set out for myself. It is now week 8 and I just finished 2.7 and that is exactly where I wanted to be. Alice is a super fun program that I have really enjoyed working, learning, and playing with.

Because I haven’t really described Alice as a program, it is an animation program. It is meant to teach the coding language called Java. Coding is taught in the way that you control the characters and frames with code instead of by click and drag like other animation programs. I have found that Alice doesn’t have a lot of practical usage, as I am proficient with Animation as I took ICT 9 in grade 9. Alice is meant more to introduce me to coding as a concept and that it is doing. I don’t think finishing Alice will teach me much about coding, but what it does it makes it easier to get into the harder stuff. I am enjoying using the program so far though so that is good. I want to meet with Mr. Findley after Spring Break, as coding is a very self-guided project but I still think it’s a good idea to meet with him and fill him in on what I’ve done so far.

I also realise that I haven’t really been updating my blog with all of the tangible things that I have completed, so I have decided to go through that a little. So in chapter one of the book it goes over the basics, using code to input characters, how to select body parts and move them with two types of code called procedures and functions. It goes on to teach how to control where you characters look and what they say and think. Finally it shows you how to order you actions, allowing you to have a conversation between them (with private thought bubbles if needed) looking and the camera and each other. It also talks about how film works (as it’s an animation program). I mostly skim over the film related stuff in the book and focus on the coding related parts.

Chapter two focuses on something called Methods, there are a number of different methods used in Alice they are mostly used for organising your scenes and switching back and forth from shots. (Keep in mind it’s all done with code) So you take your scenes and actions and use Methods to sort them into different shots and scenes and use them when you need them. This helps for when you don’t want to re code something and can just replay something using a method. There are also methods that control camera angles. In chapter 2 there is a short film I made using the Methods, with Orge’s and Wizards and spells. With Methods and conversations with basic actions between the characters. 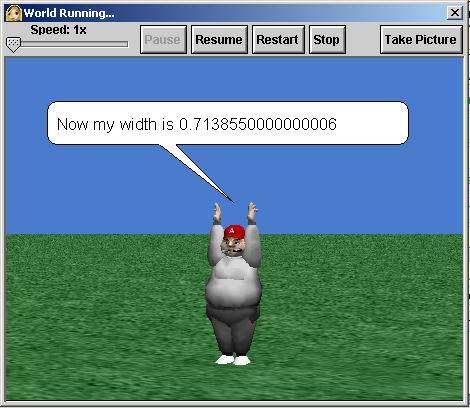 So with all that I have also been playing with the program, making myself familiar with the ins and outs and playing with it and making animations for fun. In the next two weeks, I plan on continuing my coding with Alice over spring break and ill check back in a couple weeks!